Mars is the fourth planet from the Sun in the Solar System. Like Earth, Mars has  a dense, metallic core region overlaid by less dense materials. Current models of the planet’s interior imply a core region about 1794 ± 65 km (1121 ± 41 miles) in radius, consisting primarily of iron, nickel and sulfur. This iron sulfide core is partially fluid, and has twice the concentration of the lighter elements that exist at Earth’s core allowing induced magnets to emerge due to planet spin speed of 868 km/h (542 miles/h) at the equatorial level and appear on the surface of the planet as fields of south magnet.  The planet is tilted by 25.19° about the vertical axis to the solar plateau. As with the case of Earth, the tilting produces seasons cycles much like that on Earth. The lengths of the Martian seasons are about twice those of Earth’s, as Mars’s greater distance from the Sun leads to the Martian year being about two Earth years long. The Martian surface temperatures vary from lows of about −143 °C (−225 °F) (at the winter polar caps) to highs of up to 35 °C (95 °F) (in equatorial summer). 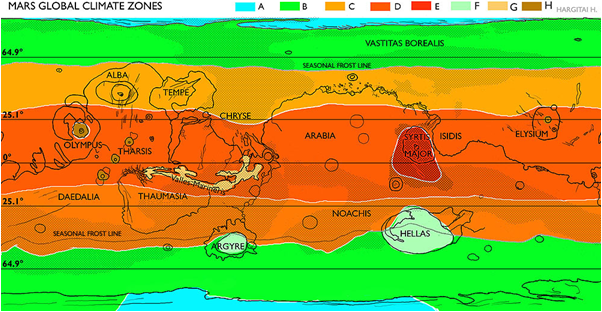 If the radiant energy of the Sun were directly responsible for the temperature variation on the surface of the planet, we should expect the region of close proximity that lies at a  right angle projection to the Sun radiant energy path to be the hottest! Yet, the Martian temperature belts are tilted by 25.19° approximately than the region of close proximity to the Sun. They are much centered on the axis of the spinning of the planet. 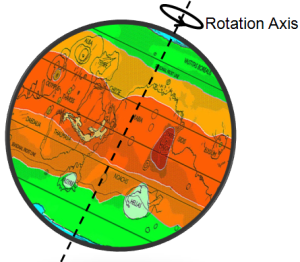 Scientists believe that Mars does not have the global magnetic field that, on Earth, is the source of the aurora borealis and the antipodal aurora australis. According to the physicists, the auroras on Mars are not due to a planet-wide magnetic field, but instead are associated with patches of strong magnetic field, primarily in the southern hemisphere which I tend to disagree and I will explain why. Earth has a magnetic configuration which is composed of A) two induced magnetic fields that are generated in the outer core. They are weak and appear in patches of south magnets in the southern and northern polar circles and B) one permanent magnet; the inner core, that is strongly fluxing out of Antarctica, circling around the planet and is observed as the Earth-wide magnetic field.  Mars magnetic configuration is no different.

The caption released by NASA of the magnetic 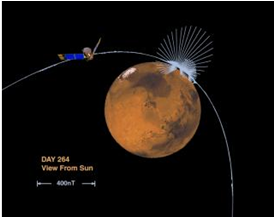 anomalies on its North Pole shows that the orientation and magnitude of the magnetic field measured by the Mars Global Surveyor’s magnetometer as it sped over the surface of Mars during an early aero braking pass. At each point along the spacecraft trajectory there drawn vectors in the direction of the magnetic field measured at that instant; the length of the line is scaled to show the relative magnitude of the field. As the magnetometer passed over the surface the needle swung rapidly, first pointing towards the planet (meaning a south magnet field) and then rotating quickly towards up (meaning a north magnet field) and back down again (meaning a south magnet field). All in a relatively short span of time, during which, the spacecraft has traveled a couple of hundred miles. Such changes of magnetic field can be explained if we consider that, similar to Earth, the Martian core has a 3-magnet configuration: i) two induced magnetic fields that are generated in the liquid part of the core. They are weak and appear as rings of patches of south magnets (Plasmoids) in the southern polar circle and in the northern polar circle and ii) one permanent magnet; the solid inner part of the core, that is aligned with the axis of rotation of Mars and that has turned weaker. Its flux out of the South Pole is consumed in 3 parts: 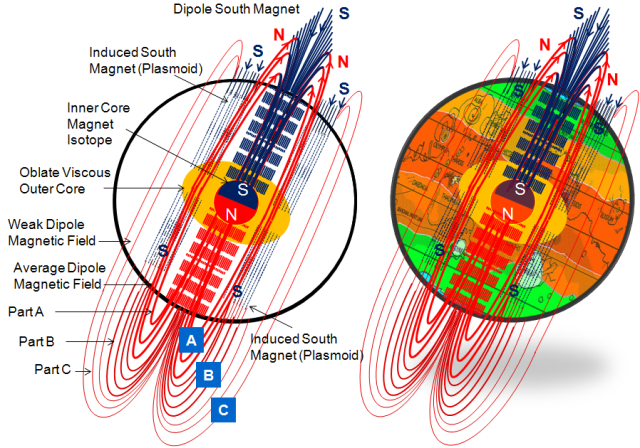 The approach of a ninth planet to the inner Solar System, causes some of the magnetic field force lines emerging from the south pole of Mars to route into space instead of following one of the three paths explained earlier. This causes the magnetic intensity to drop down allowing the protons to speed up and spiral at  longer radii around the magnetic field force lines; gaining more opportunity to collide with one another and to generate greater thermal energy. Polar ice starts to melt and global warming is observed on Mars; much like what is happening on Earth.

Needless to add, that Mars has similar spinning driver as with Earth. Refer to https://planet-earth-2017.com/what-makes-earth-spin/ and if the orientation of its permanent magnetic core is changed, the planet spin speed will change and may reverse depending on the resting angle between the magnetic field and the equatorial plane of the planet. 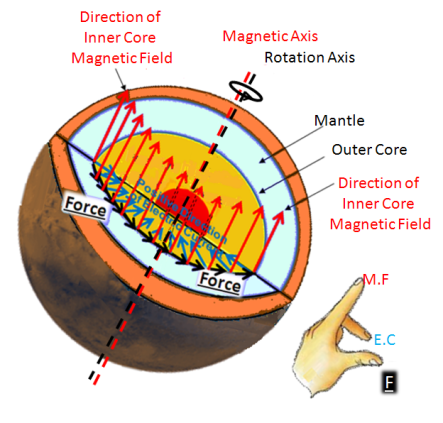