When methane emission by anthropogenic activities is less than its level decades ago, what causes its overall level to rise still?

I have not been writing to you much lately; overtaken by the sheer amount of work that has to be carried out to minimize the human and business impact of Covid-19. It was my wife who came to point out the following article that was published at Le Monde a couple of months back. The article addresses the increase of methane gas in the atmosphere, which motivated me to get back to my climate exchange work bench and resume my research into the relationship between Earth geomagnetism and global warming.

Upon taking the unit of mass into consideration, methane is 84-86 times stronger than CO2 over 20 years and 28-34 times as powerful over 100 years, according to Carbon Brief at https://www.carbonbrief.org/scientists-concerned-by-record-high-global-methane-emissions  . Its atmospheric concentration is much less than that of carbon dioxide (around 1,800 particle per billion, whereas carbon dioxide stands at around 400 particle per million). 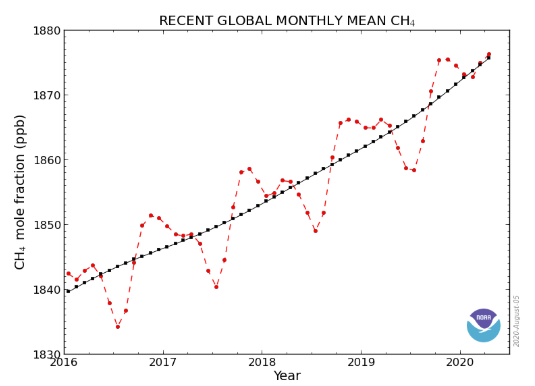 Most research works speak of methane as mainly produced by anthropogenic sources including enteric fermentation from domestic livestock, natural gas systems, landfills, domestic livestock manure management, coal mining, and petroleum systems. However, at the stability, or dare I say the decline of the average quantity of anthropogenic methane emission over the last decade as documented by US Environmental Protection Agency in its latest report that is released in 2020, one must wonder why the methane emission is on the rise https://www.epa.gov/sites/production/files/2020-02/documents/us-ghg-inventory-2020-main-text.pdf At the following table, which is part of the said report one could interpolate that the average million metric tons of methane (CH4) emission in carbon dioxide (CO2) equivalent, over the recent 5 years, is 7% below that of the year 2005 and 18% lower than that of the year 1990.

If we extrapolate the US findings across the world for acceptable averaging given the large weight of the US to global economy energy consumption, it seems that there is another source that causes the methane emission to continue to increase outside the human generating activities.

Until a decade ago, hardly anyone could have heard of methane hydrates. Now these chemical compounds that are buried at sea are prone to get harvested, and be the energy source of the future. Methane in the ocean is produced by microbes within the sea floor, which break down organic matter that sinks down from the sunlit zone near the surface. Organic matter is composed, for example, of the remains of dead algae and animals, as well as their excrement s. Huge amounts of methane are stored in the oceans at 500 meter below sea level. At cold temperatures and high water pressure, methane combines with water into a crystal form called methane hydrate. Such methane represents a large energy reserve for humanity. The total global amount of methane carbon bound up in these hydrate deposits is in the order of 1,000 to 5,000 gigatonnes – i.e. about 100 to 500 times more carbon than is released annually into the atmosphere by the burning of fossil fuels (coal, oil and gas) according to https://worldoceanreview.com/en/wor-1/energy/methane-hydrates/ . 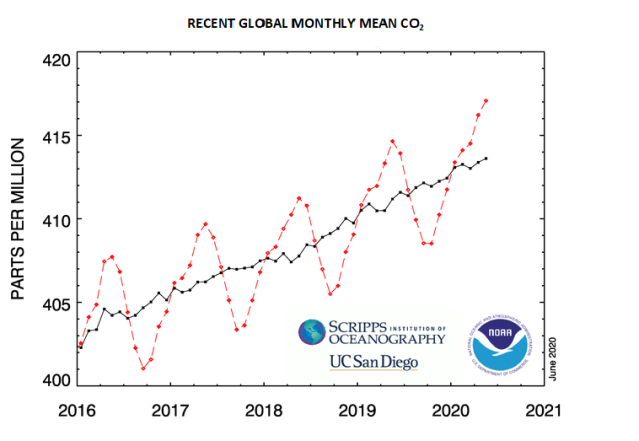 As we reflect on the conversion of methane into carbon dioxide and water vapour, we find that the conversion process can not be completed without consumption of oxygen. The conversion formula is expressed as CH4+2O2=CO2+2H2O. In short, one molecule of methane merges into two molecules of oxygen to produce one molecule of carbon dioxide plus two molecules of water vapor.  In the past 30 years or so, it is confirmed that the Oxygen level is depleting year on year.

As established earlier; the declining rate of anthropogenic methane emission in recent years when compared to two and three decades ago, and increasing methane emission reading do not tie together unless there is/ are other sources that emit methane. On the other hand, the discovery of huge amount of methane that is buried at sea, gets gradually released into the atmosphere by rising sea temperature, and could stand as the hidden source behind increased methane emission and explain the controversy.

Upon merging the 3 emission charts that are introduced earlier for methane, carbon dioxide and oxygen over the same period of time, I detect a bonding pattern of the 3 molecules manifested by a time cycle of high/ low. As we look closely we find the following: 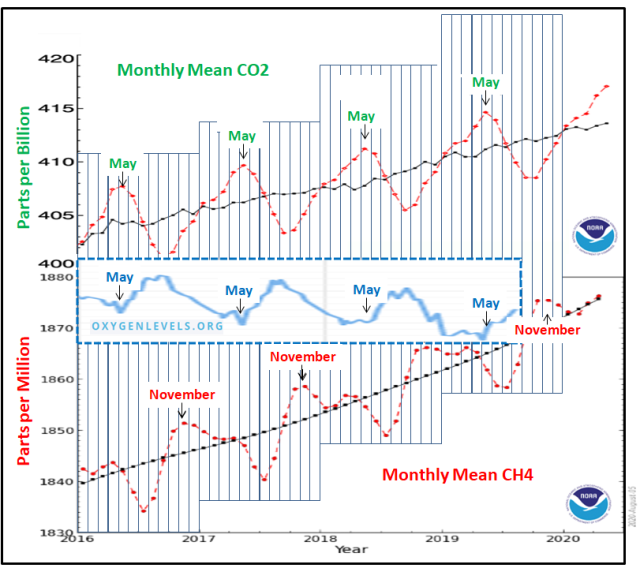 The Earth magnetic field stands against the charged particles arriving from the Sun. Most of the charged particles, mainly protons are entrapped moving helically around the magnetic field force lines. When the field is weak as at the South Atlantic Anomaly region, protons infiltrate to the atmosphere, and collide with the ocean, mainly Atlantic and Indian in the southern hemisphere at high kinetic energy, bringing the water not only to warm stance, but also to increase in warmth year on year so as long as the field at the mid distance between the two east moving magnetic poles is growing weaker year on year.

If we do not admit to the true reason behind increasing emissions of greenhouse gases, and see that the increase is not anthropogenic, then we waste a consider amount of effort, time and resources stepping on the wrong foot and running a mistaken course.