Uranus is the seventh planet distant from the Sun. It has the third-largest planetary radius and fourth-largest planetary mass in the Solar System. The Uranian system has a unique configuration among those of other planets of the solar system, because its axis of rotation is tilted sideways, nearly into the plane of its solar orbit. Its north and south geo poles, therefore, lie where most other planets have their equators. Uranus axis of rotation is tilted by 97.77° to the perpendicular axis of its solar orbit. When it comes to Uranus, scientists are faced with many unanswered questions including:

The standard model of Uranus’s structure consists of four features:

To address the aforementioned questions, I attempt to apply on Uranus the same logic that I deployed earlier on Earth to find the true driver behind the magnetic field configuration and its influence on the formation of climate regions on the face of a planet, and the variation at the spinning speed of the planet about its axis; to be able to attend to the aforementioned first three questions for Uranus.

On Space.com there is a full description Of Uranus atmosphere layer; the Troposphere where the temperature ranges from -153° to -218° Celsius , the Stratosphere where the temperature ranges from -218° to -153° Celsius, and the Thermosphere where the temperature is +577° Celsius. On Space.com there is such a quote “scientists are unsure as to the reason behind such a variation of temperatures, because the distance to Uranus from the Sun is so great and the amount of heat coming from the Sun is insufficient to generate such a surge in temperature”. As I explained earlier for the Earth temperature, the Temperature Belts, or regions of homogeneous climates are greatly influenced by the location of the magnetic pole, more than by the orthographic projection of the Sun radiation and/ or geo distance from the Sun. This is highly attributed to the radiation, which is generated from the collisions of charged particles that continuously arrive from the Sun with one another; as they spiral along the magnetic field force lines that engulf the planet.

As with the case of Earth, Temperature Belts of homogenous climates are formed in circular bands whose centre is the nearest 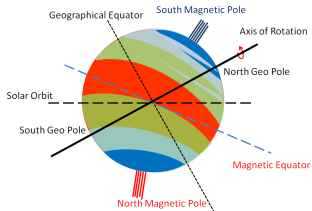 magnetic pole.  On Earth, I explained how the relocation of the two magnetic poles leads to tilting of the Temperature Belts; resulting in Climate Exchange, where arid land became lush green and vice versa. Geological records carried evidence of it. Scientists called the region where the magnetic field force lines lie above the surface of Earth: Thermosphere, and I shall use the same term to name the atmosphere region, where Uranus magnetic field force lines lie above its surface.

As explained earlier for Earth that by applying the Coriolis Force, it is evident that there are two types of magnetic field forces that are emitting from the core of Earth. A permanent magnetic field with clear south and north polarity poles, and an induced magnetic field force of south polarity at both geographies. This stands behind the Plasmoid phenomena that started to emerge and grew in Antarctica over the past 10,000 years. The source of induced magnetism is the spiraling electrons flowing at the Outer Core. On Earth, I found out that the source of the permanent magnetism is the Inner Core. The Uranus core is composed of similar material as Earth’s Inner Core, and that Uranus inner mantle, which is in liquid state performs a similar function to Earth Outer Core that is in liquid state as well. The fact that Uranus mantle has a high electrical conductivity, confirms that Uranus core is as radioactive as Earth’s Inner Core if not higher, otherwise where would the high flow of electrons come from. It also confirm that on Uranus inner mantle shell, there meet electric current, magnetic field and hence a produce Lorentz Force.

The fact that Uranus has a greater mass, and does spin about its axis faster than Earth leads to one of three possibilities, following Earth spin speed model that I explained earlier on this site, in which I demonstrated that the Lorentz Force is the driver for any planet to spin about its axis. The 3 possibilities are (i) Uranus has a much powerful permanent magnetic field, (ii) and/ or, it has a much stronger electronic current that is generated from its core, (iii) and/ or, the angle between these two electromagnetic forces is an angle gap of 90°. Since Uranus average magnetic field at the surface is only 0.23 gauss (23 µT), which is weaker than Earth’s; having an average of 0.5 gauss (50  µT), and since the angle gap between the magnetic dipole and the axis of rotation is less than 90° as per the diagram above, then there is no escape but to have a much higher rate of electrons’ currents flowing out of Uranus core to fuel the Lorentz Force and bring the planet to spin about its axis at a faster speed than Earth even when its mass is 14.5 times that of Earth.

At the higher layer of Uranus mantle where the state becomes solid due to extreme low temperature at the surface, the interactions between (i) flowing electrons that always follow a perpendicular, spiraling trajectory to the axis of rotation, according to Coriolis Force for particles moving on a rotating disk or in rotating sphere, (ii) Permanent magnetic field force lines that flow out from a permanent north polarity magnet, and flux into a permanent south polarity magnet, and (iii) Induced magnetic field force lines of south polarity that are parallel to the axis of rotation (perpendicular to the electrons flow trajectory); all that lead to the generation of Lorentz Forces at the tangent shell between the two layers of the mantle. FC indicates Lorentz Force in clockwise direction and FA indicates Lorentz Force in anti-clockwise direction as per above figure. You find that the length summation of forces applied on areas under Arc106° and Arc120° is larger than that of Arc74° and Arc60°. Accordingly, the summation of the clockwise Lorentz Forces acting on the larger arcs areas is greater than the summation of anti-clockwise Lorentz Forces acting on the smaller arcs areas. The resultant torque out of these forces drives the planet to spin and explains why Uranus is propelled to spin in a clockwise and not anti-clockwise direction as on Earth. This  answers the aforementioned question 3.

The Lorentz Forces that is generated at the regions falling below Arc60° and Arc74° are opposite forces to the neighboring Arc120° and Arc106° forces, and therefore cause a region of distress below the magnetic equator and cracks in Uranus upper frozen mantle.  The collision of the opposite Lorentz Forces results in quakes and rifts in Uranus upper frozen mantle. The escape of liquid at high temperature from Uranus inner liquid mantle to surface through outer frozen mantle aperture leads to rising temperature on the surface. The variance in atmospheric temperature causes a variance in atmospheric pressure. As we know, wind is generally caused by differences in the atmospheric pressure, and when a difference in atmospheric pressure exists, air moves from the higher to the lower pressure region, resulting in winds of epic speed in the region south of the magnetic equator, and therefore answers the aforementioned question 4.

By investigating the location of the magnetic poles at all giant gas planets of the solar system [3], it appears that the same spin model that applies on Uranus does apply on all other 3 giant gas planets;